We've been pretty busy.  Kelly mostly with work...  Last month she was cleared for fire duty and worked twenty days straight.  That finally gave the people filling in for her a chance to get some time off.

On the Friday before Mother's Day, I picked up our thirty broiler chicks.  They were s'posed to arrive nine days earlier, but something happened at the hatchery.  They are now three weeks old, so we moved them out to the kennel.

The feed store gave me a bonus rooster.  He's a Silver-Laced Wyandotte.  Here's a picture of him in the transfer tub riding on the back of a piggy bird... 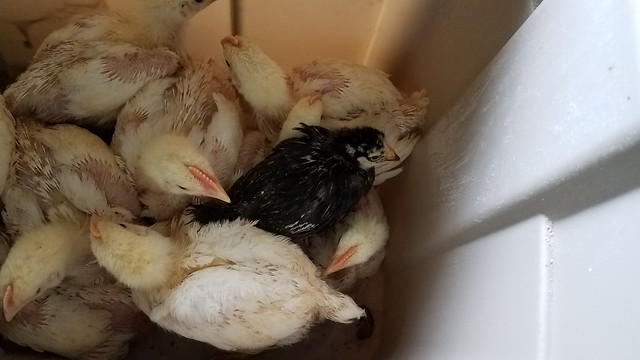 On Mother's Day, I drove down to Wausau to pick up bees.  I bought two hives-worth.  One is doing great...  The queen is laying eggs anywhere she can.  The other is doing not great...  Something must have happened to the queen on the ride up from Georgia.  I gave them a frame of eggs from the other hive last week and they are making new queens now.

The weather has been up in the 80s the last two days.  So, we went out to the Lake House for the first swim on the year...

It was my second dive, so I tried to make a big splash.